The National Football League has officially announced a new sportsbook partnership with Caesars Entertainment, DraftKings, and FanDuel. The partnership is both groundbreaking and unsurprising, as the NFL has previously taken a strong stance against sport betting but has recently adjusted their stance as many professional sports teams have come to embrace the budding industry. Now, as sports teams, stadiums, and professional leagues throughout the country strike lucrative sports betting deals, the NFL is looking to use a new deal to increase fan engagement and add to their existing revenue streams.

A New Perspective on an Age-Old Debate

Professional and collegiate sports leagues have been at odds with sports betting for decades. Many league officials, athletes and fans throughout the country have questioned whether or not gambling could damage the integrity of the games that they have grown to love. The NCAA, NBA, NHL, MLB, and the NFL even went as far to engage in a six-year battle with the state of New Jersey over sports betting legalization. The result of that debate was the decision in 2018 from the Supreme Court, which lifted the ban on sports betting, allowing states to begin planning their own legislation for legal sportsbooks. 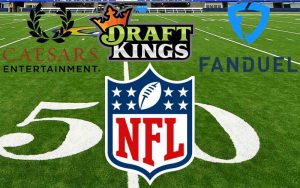 Since the decision from the Supreme Court, professional sports leagues have skillfully repositioned themselves to not only accept legal sports betting but also embrace it. Throughout the country, professional sports teams are striking new deals with legal sports books; many electing to engage in lucrative partnerships that allow for sports betting at their very own venues. NFL chief revenue officer and executive vice president of NFL partnerships Renie Anderson announced this month that the NFL is looking forward to working closely with Caesars, DraftKings, and FanDuel to provide fans with a new way to engage with the sports that they love.

Details of the financials surrounding the new deal have not been made public, but sources have suggested that the new 5-year deal could be worth nearly $1 billion. That $1 billion gives Caesars Entertainment, DraftKings, and FanDuel the right to use NFL intellectual property and use its trademarks for betting promotions. This partnership is not only monumental in its price tag, but also the impact it could have on sports betting and the league itself.

The new deal between the popular sportsbooks and the NFL will bring a number of immediate changes to the upcoming NFL season. The betting companies will now have access to a content-sharing model with the league. Through this model, the betting sites will be able to use NFL highlights and Next Gen Stats data to help set betting lines and help push promotional content on their sites and betting apps. The NFL confirmed that Caesars will keep it league sponsorship, while DraftKings and FanDuel could get more brand exposure on league media properties like the NFL Network and NFL RedZone channels. Fans could even see point spreads integrated into coverage, with additional evidence of sports betting influence throughout each broadcast.

Anderson cited that the new deal will not only prove to be lucrative, but it will also evolve and change to amplify consumer engagement. The league recently agreed to media rights for the upcoming season as well, partnering with NBCUniversal, Fox Sports, ESPN, CBS Sports and Amazon for an 11-year deal worth over $100 billion. The NFL ultimately hopes that the new sportsbook deal will provide the already football-obsessed fanbase with a new take on the game they love. Under the deal, the NFL has exit options at the end of the third and fourth years.

Sources close to the deal said that the revenue structure will not be tied to the outcome of bets on league games, and that the deal resembles a more traditional sponsorship partnership. The announcement has already had a big impact on DraftKings, whose stock rose 4% on Thursday. As the season approaches, the NFL may continue to use the deal to make changes to integrate sports betting into the fold of day-to-day life in the NFL, as fans continue to help the sports betting industry grow throughout the country.