On Wednesday, January 20, the Virginia Lottery issued a sports betting permit to the Washington Football team, making them the first franchise in the National Football League to receive a sports betting license. Thanks to its partnership with FanDuel, the Washington Football Team was able to launch a mobile sportsbook in the Commonwealth on Thursday, just in time for bettors to get in on the AFC and NFC championship games on Sunday. As it stands, the sportsbook is launching exclusively online, as the possibility of future retail sportsbooks is still being discussed.

The Evolving Stance on Sports Betting 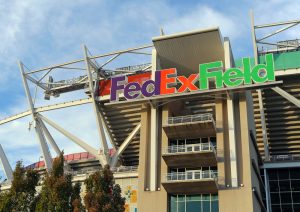 The financial details of the partnership are not yet clear. Per the NFL’s policy, NFL franchises cannot directly participate or provide sports betting. That being said, in states where sports betting is legal, teams can partner with existing sportsbooks who have a license to operate. Sports betting in Virginia was made legal after Gov. Ralph Northam signed it into law in July 2020. Six months later, the first sportsbook has officially gone live, just weeks before Super Bowl LV.

The Virginia Lottery expects to launch additional sportsbooks before the big game, but for now residents will have to wait. Large sports betting companies such as MGM, Draft Kings, and Barstool Sports have all applied for licenses in the state, but none have been approved.

A Change of Scenery

The Washington Football Team plays at FedEx Field in Maryland; however, its team headquarters and practice facility are located in neighboring Virginia. As it stands, the team pays nearly $14 million in taxes each year, and is rumored to be considering locations for a new stadium. With the new partnership, Virginia could offer the perfect location for the next stadium.

Virginia’s interest in building the new stadium has been no secret. In fact, the sportsbook is a result of the state’s sports betting legislation, which give preferential treatment to the team so that FanDuel can be the first sportsbook in the state. For now, FanDuel will display signage at FedEx Field while displaying the Washington Football Team’s logo across their mobile sportsbook.

While the Washington Football Team and FanDuel are the first sportsbook and franchise partnership in the NFL, they certainly won’t be the last. Illinois and the District of Columbia have already taken steps toward allowing other professional teams and stadiums to receive sports betting licenses. Capital One Arena, home of the Washington Wizards and Washington Capitals, already has a retail sportsbook. Nationals Park is the next professional sports venue in Washington D.C. expected to add some type of sports betting. Elsewhere, the Chicago Cubs hope to add a sportsbook of their own.

Since the lift on the ban of sports betting in the United States, nearly every state has passed legislation or are at least considering legislation for regulated betting. Idaho, Utah, and Wisconsin are the only states that have not welcomed the idea of sports betting. Such a trend suggests that additional partnerships between professional sports franchises and big-name sports betting companies will become commonplace in the near future.