Tennis might seem like a simple sport to bet on at first since there are only two sides to choose from and there is no chance of a draw occurring. However, there are nearly as many bet types to choose from when wagering on tennis as there are in the other major sports which might get slightly confusing if you aren’t familiar with the terms.

While tennis might not be the top dog in the U.S., many would still consider it to be the 5th or 6th most popular sport for Americans to watch and bet on. In places such as the sports betting mecca of the UK, it ranks as high as second place in popularity behind only soccer.

There are many different categories to choose from when betting on tennis which includes the Association of Tennis Professionals (ATP) world tour for men, the ATP Challenge which is sort of like the minor leagues of tennis, the Women’s Tennis Association world tour for women and then the doubles tournaments for all three. The doubles category generally features two players of the same sex on each team but in the US Open, the Australian Open, Wimbledon and the French Open there will be one man and one woman on each doubles team. 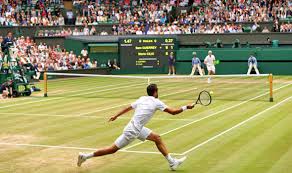 Tennis is a betting market that can be found in sportsbooks worldwide which doesn’t always have betting lines that are as sharp as the other large markets have thanks to its relatively lower level of popularity and bet volume. This means that there are many edges to be found here and there when betting on tennis thanks to the inferior lines. Many tennis bettors are returning net profits on their side of the court so let’s dive into each available tennis bet type to see what the racket is all about.

Otherwise known as a moneyline bet in most sportsbooks, a match bet asks you to choose which side will win the tennis match against a certain player. The amount of money that you are paid out from winning this bet all depends on how likely your side was to win the match. For example, betting a heavily favored player in a specific tennis match might only pay pennies on the dollar but if you bet the heavy underdog in that same match your odds could be 10 to 1 or better.

With the odds set in this manner, it makes it extremely lucrative to be able to spot good situations where you should bet on an underdog. You do not have to be correct a large percentage of the time in order to make a profit when choosing underdog moneyline bets which is the major reason why they are so much fun.

For instance, if a player has their match bet odds set at +400 then you only need to win your bet on them once every four tries (25% of the time) in order to break even. We suggest trying some bets on young upcoming tennis players who are heavy underdogs against popular stars since their odds will be skewed from not getting enough bets made on their side and that brings some value to the table.

When betting on matches in tournaments such as the four Grand Slam events it is important to note that upsets occur less frequently on these large stages. This is mainly because the top names train year-round so that they peak for these four prestigious tournaments that have the highest prizes and the most ranking point available for players who do well. It is easier to trust the favorites in these spots because you can be sure they are in tip-top shape and that they are trying their hardest.

Set bets are a lot like match bets because you are just picking which player or side will win. However, the only difference is that the timeframe has changed from the entire match to just a specific set. This can present lots of interesting betting opportunities, especially when dealing with players such as Roger Federer who is known for doing poorly in his first set. 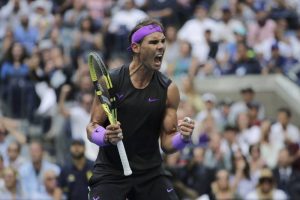 You will often find bets that ask you to pick who will win the first set before the match begins, but that is not the only time you can find set bets. If you are live betting you will have the option of betting on who will win every set while the match is actually happening in real-time. You may also get the option of betting on very specific stats such as the number of games that are in each set.

Sometimes the difference in skill between both sides of a tennis match is so great that it really isn’t worth making a bet on either side because there is a low probability of the underdog pulling off an upset and betting on the favorite does not return much on the dollar. This is where handicap betting comes in which gives a certain number of games or sets added to the underdog’s score so that it’s more of an even fight and the odds are more reasonable. This bet is also known as a spread bet and functions the exact same way as it would in other sports.

For example, if you make a bet on Nadal who is listed as a -1.5 set favorite over his opponent then 1.5 sets will be subtracted from his total number of sets won at the end of the match and then compared to his opponents total number of sets won in order to determine if you won your bet. If Nadal wins by 2 sets then you win your bet but if he wins by only one set then you will not win your bet.

A quick way to tell which player is favored is that the one with the negative handicap next to their name is the favorite while the player with the positive handicap is the underdog. If a player is favored by a number of sets that has .5 at the end of it then there are only two outcomes possible and a push is not one of them since there are no half points awarded in tennis.

The over/under or the total in tennis is referring to the number of games that will be played before the match is over. When you bet on the over in a tennis match then you are betting that there will be more games than the number that the total line is set at.

If you think a match will stay close with a bunch of back and forth lead changes occurring, then the over bet is going to be your best option since the number of games played will be inflated. Generally, when a superstar is playing an unknown player it would be silly to bet the over since it is highly unlikely that they will be able to compete for very long, especially if it is one of the four major tournaments.

One of the riskier ways to go about betting on tennis is correct score betting which allows you to bet on exactly how many sets will be won by each player. Much like the name says, the score you pick must be correct or else you will lose your bet. As you might imagine, this is pretty tough to pull off on a regular basis unless you have a Delorean or a crystal ball handy.

You will generally receive very good odds on your bet when choosing an exact score for your correct score bet which is to be expected due to the low probability of that exact score occurring. This makes correct score betting one of the most exciting and profitable types of tennis bets despite the fact that you will receive money back a small percentage of the time.

Placing bets on a single tennis match can get boring after a while so some bettors prefer to make what are known as outright bets which ask you to predict which player will outright win the entire tournament. These types of bets are very similar to futures bets in other sports and the lines are usually listed months before the tournament even begins.

An outright bet is a great way to get multiple tennis matches worth of entertainment with just one wager. You will obviously find yourself rooting for the player that you bet on in every match that they play but then you will also find yourself rooting for the easiest competition in their bracket to win their respective matches so that your outright winner pick has an easier road to the top.

If you do correctly pick the player who wins the entire tournament and it was not one of the top-seeded players then you are going to be in for a huge payday. The most unlikely players to win each tournament generally have payout odds of around +20000 or 200 to 1 on your money and the favorite players are usually only paying -100 to +500.