Hockey may not be as popular as the other major sports, but you will still find betting options available for the NHL (National Hockey League) in nearly every single North American sportsbook in existence. This is the most prestigious ice hockey league in the entire world with 31 teams and 9 months of action every year. Although the NHL is a dominant force in this market, you can find bets for other smaller hockey leagues from time to time in various sportsbooks.

There is certainly no shortage of bet types available for these icy contests and some of these bets are not found in other sports which could make things slightly confusing to a new hockey bettor. Throughout this article we will do a brief skate-through of all the various betting options you will encounter in a sportsbook when placing a bet on a hockey match and try to prepare you for the experience as much as possible.

If the moneyline odds are listed as a positive number, then that number is telling you exactly how much money your total profit will be if you bet $100. For example, +110 is a popular number for the underdog odds in a close match and if you bet $100 on that underdog team you will win $210 total for a $110 profit. 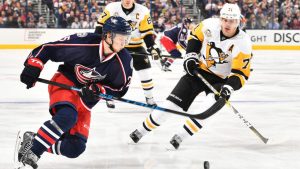 Moneyline bets are extremely popular in hockey due to the very low-scoring nature of the game which allows for more unpredictable outcomes to occur. Over the last five years combined in all major sports, hockey ranks second highest behind only baseball in terms of underdog winrates at 40.6%.

How many goals will be scored in any given hockey match? If you answered “Not many!”, then you are correct. However, sportsbooks will require you to be a little bit more specific when making a totals bet and all you have to do is pick whether the final score will be over or under the given totals line.

Let’s say the Bruins are playing against the Rangers and the totals line is set at 4.5 goals. If both teams score a combined total of 5 goals or more, then any bettor who chose the over bet is a winner. If the combined score of the game is a total of fewer than 5 goals, then anyone who made the under bet is a winner.

One thing you should know before betting on any totals in hockey is that the overtime goals will count towards the total but if the game comes down to a shootout situation then the shootout goals do NOT count. This is different from moneyline or puck line hockey bets where the shootouts DO count towards deciding the final score for each team since the winner of the shootout is awarded one extra goal no matter what.

A puck line bet is hockey’s version of the run line bet in baseball where almost all of the spreads for each team are set at either +1.5 or -1.5 goals. The only exceptions to this rule are games that are extremely lopsided in skill level.

The variable of a puck line bet that varies the most from game to game is what odds each side of the 1.5 line is offering. More often than not, the favored team that has to win the game by 2 goals or more due to the -1.5 spread will be offering positive odds on a bet in their favor.

It is not uncommon to see a puck line for a team getting 1.5 goals in their favor giving -300 odds while a puck line bet on the favorite that has to give up 1.5 goals will give +200 odds. In this instance, if the final score of the game is 4-2 with the favorite winning the game, then you would receive $100 profit if you wagered $300 on their -1.5 puck line bet. If the final score was 4-3 with the favorite winning the game then the underdog +1.5 goals would instead be the right selection and you would have profited $200 if you wagered $100 on it.

If a single one of these games that you pick does not win then you will lose your entire parlay bet, but if every selection wins your payout could be massive. The more teams you add to the bet the higher your payout will be but it will also be noticeably more difficult to win. 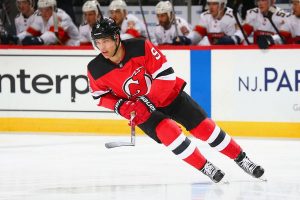 Even if a game goes to overtime in hockey it will never end with a tie game which means that parlays that are full of moneyline bets will never have any pushes. A push occurs when the favored team wins the game by the exact puck line amount and since most puck lines are in a 0.5 format then it is impossible for pushes to happen there as well since it is not possible to score half of a goal. Nonetheless, if a push does occur in hockey due to a rare puck line that does not have 0.5 added to it then the game will be removed from the parlay. For example, if the bet you made was a 3-team parlay and one of the games was a push, it would then become a 2-team parlay.

The grand salami is a bet which is ONLY available in hockey markets and it is a fun way to guarantee that you have some interest in every game that plays that day. The way it works is that you place a wager on whether or not the cumulative score of every single team that plays on a specific day will go over or under the grand salami total line.

Championships are not the only future events that you can bet on in hockey since many online sportsbooks will offer bets on who will win the NHL Awards in June. For this event, you will be able to bet on which player wins the awards such as the Bill Masterson Trophy, Calder Trophy, Selke Trophy, Hart Trophy, James Norris Memorial Trophy, Lady Byng Trophy or the Vezina Trophy.

Always remember that any funds you wager on a futures bet will be held by the sportsbook until the event is finished and the bet is settled. This means that making a preseason wager in September on who you think will be the winner of the Stanley Cup Finals in June will keep your money in limbo for around nine months.

Prop bets or proposition bets are one of the most exciting ways to bet on a hockey match without having any interest in the actual score of the game or which team is winning it. These prop bets can be individual prop bets where you bet on the performance of a specific individual (usually a superstar player) or they can be team prop bets where you bet on something you think the team will do.

A common player prop bet in hockey is whether or not a certain player will score a goal or whether he will have more goals and assists than a player from the other team. In the latter example, if you choose the player that has the highest number of goals and assists combined then you win your bet.

A popular team prop bet that you will find in hockey is which team will score first in regulation time. For a prop bet like this if you simply need to pick the team that scores first in order to win your bet. The only catch is that this goal has to happen before any overtimes occur due to the “in regulation time” aspect of the prop bet. If no goal is scored in this match before overtime then the bet is a push unless otherwise stated.