Mixed Martial Arts, otherwise known as MMA, is an exciting sport that involves two humans in a large cage pounding on each other until either one man is knocked out or the fight is over (usually 3-5 rounds depending on the importance of the fight). The fighting organization that stands above all of the rest is known as the UFC or Ultimate Fighting Championship, but other popular organizations include Bellator MMA, Invicta FC, and ONE Championship.

Over the last few years, MMA/UFC has seemingly overtaken boxing in popularity by a wide margin thanks to superstars such as Jon Jones and 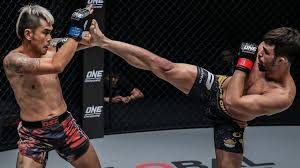 Khabib Nurmagomedov dominating the scene. The only way this combat sport can get any more action-packed is if you place bets on the fighters that you like which is the reason why millions of dollars are being bet annually on the outcome of these intense fights.

Fortunately, betting on MMA is possible at nearly any online sportsbook you can find as well as in most of the brick-and-mortar sportsbooks. For a beginner, MMA betting might be one of the easiest sports to get into because there are not as many complicated bet types to consider like there are in other markets. Let’s now take a closer look at what some of these bet types are and what you can expect when you partake in each one.

The most basic type of bet you can make in MMA is a match bet where you simply pick which one of the two fighters in any given match will emerge victoriously. These bets are also sometimes known as moneyline bets due to the fact that the odds are structured much like moneyline odds are in other major sports.

For example, let’s assume Khabib Nurmagomedov is scheduled to fight against Conor McGregor and he is listed as a -350 favorite over Conor in most sportsbooks. Since this number is negative it means he is the favorite in the fight and the number 350 indicates that you will need to bet $350 in order to win $100 profit if Khabib wins. Alternatively, the odds on McGregor winning the fight is set at +265 which means that you will receive $265 profit if you bet $100 on McGregor and he pulls off the upset.

The odds on each fighter are generally set at a point where it attracts an even number of bets on each side of the fight so that the sportsbooks can make a profit without worrying about the outcome of the match. This means that you should not always be betting on who is more likely to win the fight since the odds may sometimes be so tempting on the underdog that you bet on them instead. If a fighter is listed at +300 odds to win their match then you only need to win your moneyline bet on them a mere 25% of the time just to break even.

Round Over/Under Bets in MMA/UFC

Tired of betting on who is going to win each fight? Well one way to add some spice to the way you bet on MMA is to make round bets which instead focus on how long each fight will take to finish. 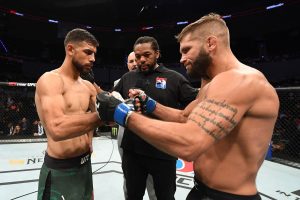 Most round over/under bets will provide you with the number of rounds that Vegas thinks the fight will last on average and then you have to choose whether you think the fight will go over or under that number of rounds. For instance, if the round over/under line for the aforementioned Khabib vs Conor fight is set at 1.5 rounds and you bet on the over then the fight must last for two rounds or more in order for you to win your bet. However, anytime there is a vast difference in skill level between the two fighters in question you might want to consider avoiding any bets on the over since the fight will likely be decided very quickly.

Round and Minute Bets in MMA/UFC

For those bettors who do not have the time or the interest to watch an entire MMA fight, round and minute bets allow you to make wagers which will be settled in a short period of time. Whichever fighter is victorious during that specified period of time will win your round or minute bet for you.

One of the most popular rounds to bet on is the first round but you can usually make bets on the outcome of any round you choose. There are sometimes options to bet on the exact minute of a specific round that a fighter will win the match, which is probably the hardest but most rewarding bet that you can make in all of MMA. A bet that says a fighter is “To Win within the First Minute” is fairly self-explanatory since it simply requires the fighter to win his fight before the 60-second mark.

Method of Victory Bets in MMA/UFC

Another unorthodox but lucrative way of betting on an MMA fight is to try and figure out the method of victory that will occur. The possible ways that a fight could end are by knockout, technical knockout, submission, decision, technical decision or a technical draw.

The technical decision and technical draw outcomes are pretty rare occurrences since they involve the fight being stopped before the scheduled number of rounds so that the judges can decide who the winner is. The technical draw occurs when the judges cannot decide on a winner for whatever reason and a tie is then declared. A good example of why these sorts of decisions might happen would be if both fighters bump heads extremely hard and the fight cannot be finished.

Occasionally you will find bets that combine a method of victory bet with a round bet. These bets will ask you to determine exactly what round the fight will end AND what method of victory the winner will have. In order to win these bets you will have to be correct on both fronts, much like in a two-team parlay. As you can imagine, these specific types of bets are challenging to win but they payout extremely well when you do hit one.

Prop bets are a random assortment of bets that ask you to answer obscure questions such as which fighter will land the most significant strikes, which fight will be the fight of the night, or which fighter had the most takedowns. If you pick the right answer to the multiple-choice question then you win your bet, it’s as simple as that! Some people think that making a prop bet is a silly endeavor but there is certainly some good value to be found here if you are an avid MMA fan who wants to leverage your knowledge of the sport.

It is usually a smart idea to pair your prop bets with other types of bet on the same fight so that they complement each other. To revisit the previous example fight, if you really want to bet that Conor McGregor will win his fight against Khabib then you might also want to bet that he will land the most significant strikes and that the fight will last fewer rounds than the over/under is proposing since he is a heavy underdog and will probably need to rely on an early knockout punch to succeed. By making these different correlated bets you ensure that if the fight goes as planned then you can collect a huge payout and if you were wrong then you still might win a little bit of money back from being partially correct.