Back in November of 2018, Major League Baseball announced that MGM Resorts would be the league’s first ever gambling partner. When you consider baseball betting scandal stories such as the Black Sox in the early 1900s and Pete Rose in 1989, it is mildly shocking that MLB would ever make such a move. Even more surprising is the fact that, just this week, MLB announced that they had penned a deal with DraftKings, one of the largest daily fantasy sports operators in the world.

What Does the Deal Entail?

The deal between DraftKings Inc and Major League Baseball is a multi-year deal that will allow DraftKings to use official league data and logos within its online offering. How this might look for DraftKings players is that you will see your drafted team appearing in their official MLB uniforms and will be basing your selections off of data provided directly by Major League Baseball. 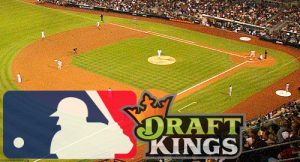 The financial terms and exact length of the deal were not disclosed, but you can rest-assured knowing that this was no small transaction. Gambling is something that has been intertwined into foreign soccer and other professional sporting leagues for decades, but has long been something US sports leagues have avoided talking about, much less promoting.

Thanks to the overturning of the 1992 Professional and Amateur Sports Protection Act last year, states like New Jersey, Mississippi, and Pennsylvania have created legalized and regulated sports betting networks. As an increasing number of states move to legalize and regulate the activity, we expect that deals such as this will become increasingly commonplace. What’s more, we may soon be seeing sports betting not just being affiliated with Major League Baseball, but in MLB stadiums as well.

Dodger Stadium, home to MLB’s Los Angeles Dodgers, is one of the oldest stadiums in the league (built in 1962) and is set to be replaced in the coming years. Renderings for the new stadium were released this week and, according to an article by the Los Angeles Times, the images showed a part of the stadium where sports betting odds were clearly displayed. Naturally, the assumption has become that the Dodgers are contemplating taking advantage of the shifting mood towards sports betting by creating a part of their ballpark specifically for it. 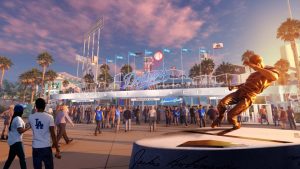 For California’s five Major League Baseball teams, sports betting is something the remains a long ways away for the time being. Understanding the massive potential for tax revenue from betting at stadiums and sports betting in general, perhaps sports betting legalization will be expedited. For now, however, we will simply have to look at an artist’s renderings and wonder about the possibilities.