Sports and gambling enthusiasts in Arizona have a reason to be hopeful, as two separate bills for sports betting legislation are now moving through both the House and Senate. Arizona is one of many states working to pass new sports betting legislation, as the United States continues to welcome what has become a booming industry, after the Supreme Court lifted the ban on sports betting in 2018. In Arizona, this legislation presents a unique challenge, as it needs to overcome a number of hurdles associated with the Arizona Tribal-State Gaming Compacts established in 2002. Despite these hurdles, many believe the opportunity to place wagers at Atlanta Braves’ Chase Field or at the Phoenix Suns’ Suns Arena could become a reality in the very near future.

Arizona has the most Native American land in the United States. This land makes up about 27% of the land in the state, a total of more than 20 million acres. The Indian Gaming Regulatory Act (IGRA), a federal law, gives tribes in the state the opportunity to operate casinos on these lands. The law permits gambling on Indian reservations through compacts established between the tribes and the state. There are 16 tribes in the state, and they are responsible for operating 22 casinos. All gaming revenue is required to be used for tribal governmental and charitable ventures only. Now lawmakers are weighing options for introducing sports betting into the fold. 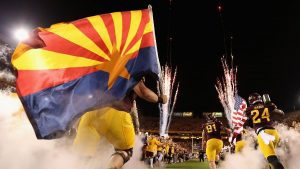 Gambling in the state of Arizona has been limited to tribal casinos, horse and dog racing, and the official state lottery. Gambling is regulated by the state and is illegal at locations that have not been designated by the state. The Arizona Tribal-State Gaming Compacts of 2002 established rules for tribes to operate casinos on tribal lands. At the time, sports betting was prohibited throughout the state, but much has changed since then.

Two Bills with a Common Goal

The two major bills that are moving through the House and Senate are HB 2772 and SB 1797. The bills both propose event wagering and online sports betting, with up to 10 tribes and 10 professional teams licensed to provide online betting platforms. Both of these bills would open the door for online sports betting options like FanDuel or Draft Kings, and they would give fans the opportunity to place wagers at major professional sporting events. There are currently eight professional sports teams in Arizona, including franchises in the NFL, MLB, NHL and NBA.

The proposed legislation is similar to the many other plans that states across the country have rolled out, as the sports betting industry continues to grow. For example, the Washington Nationals recently announced their plans to open the first sportsbook in an MLB stadium. Many believe that these are the first steps toward a nationwide shift in the way Americans view sports betting, opening the door for many to follow the lead.

Challenges on the Path Ahead

There is still some speculation surrounding the number of licenses these bills could issue. The most confusing point of contention is that the bills allow for 10 licenses for professional teams, when there are only 8 professional teams in the state. On the other hand, the proposed legislation would only allow 10 licenses for the 16 tribes within the state. While both bills are progressing, through the House and Senate, they have faced their fair share of challenges and even more lie ahead.

HB 2772 was introduced by Rep. Jeff Weninger (R.) of LD 17 Chandler, Sun Lakes, and Gilbert. Weninger believes that this bill will do wonders to modernize gaming in the state and it will do so with the support of Gov. Doug Ducey. SB 1797 was already pulled and added as an amendment to a previous horse racing bill. After passing on a 5-4 party line vote, it moves to another vote on March 10. The current bill, which is now 1794, finds itself up against an old foe, in the form of the 2002 gaming compact between the tribes and the state. Many feel that the compact would have to be renegotiated in order for this bill to pass.

It is too early to tell whether or not either of these bills will be passed, but so far HB 2772 has gained the most traction. Once approved by the House, this bill would then go to the Senate for a vote. At the earliest, residents of Arizona could see sports betting in 2022. At this time, complications surrounding tribal gaming compacts seem to be the biggest threat to the passing of either bill. As it stands, the tribes pay roughly 8% of their casino revenue to the state. If the sports gambling bills pass, that number would decrease. The month of March will reveal whether or not either bill has the legs to move forward.