A coalition of Native American tribes proposed a ballot measure for the 2020 election, which could give voters the opportunity to decide whether or not sports betting should be allowed at racetracks and tribal casinos. The filing of these papers has been supported by 18 tribes throughout the state and marks the newest chapter in the ongoing push for sports betting legalization in California. This initiative has been led by the Pechanga Band of Luiseño Indians, who have stated that they believe Californians should have the option to participate in sports wagering in a regulated and safe manner. The interest of the tribes comes on the heels of another sports betting bill, which was introduced by Sen. Bill Dodd (D-Napa) this past June. The action of the tribes suggests that they want to ensure they get a piece of the action. The tribes now face the task of collecting the signatures of nearly one million registered voters in order to make next year’s ballot, but that’s not the only obstacle that stands in the way of sports betting legalization within the state.

Details of the Initiative

The coalition’s proposal would allow California’s Native American tribal casinos and racetracks to offer retail sports betting, as well as craps and roulette. Bettors must be 21 or older to place a wager and wagering on high school sports and Californian collegiate athletics would be prohibited. Any marketing or advertising directed at minors would be illegal, and consumer protections as well as anti-corruption measures would be put in place in order to guarantee the integrity of sporting events. Tax on sports betting revenue would be at 10 percent and that revenue would be directed to public safety, mental health programs, education, and regulatory costs. The ultimate goal of the proposed legalization is to help address concerns over illegal and offshore sports wagering operations, which lack the necessary safeguards to protect Californian citizens. 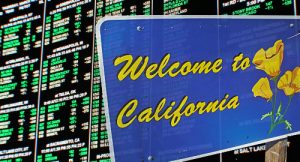 An important component of the proposal is that sports betting would only be offered in-person. Bettors would not have the option of betting online or through a mobile device and must travel to a casino or racetrack in order to make any wagers. This may raise a few eyebrows considering the fact that in states where sports betting has been legalized up to 80 percent of wagers are placed remotely, rather than in-person. The hope is that by offering sports betting at these established locations, officials could enforce strict regulations and ensure responsible gambling and transparency. Additionally, the tribes may fear that online and mobile sports betting could take business away from their casinos.

The legalization of sports betting in California has been an ongoing discussion since the Supreme Court’s 2018 decision to allow states to legalize sports betting. Since California officials made their proposal this past June to legalize sports betting, conversations between constituents suggested that change could be in the very near future. The new proposal from the Native American tribes has complicated this in some ways. The supporters of the new initiative include the Ague Caliente Band of Cahuilla Indians, the Barona Band of Mission Indians, the Morongo Band of Mission Indians, and the San Manuel Band of Mission Indians; all of these tribes operate some of the most successful casinos in the state, thus giving weight to their proposal.

The proposal to offer sports betting at casinos and racetracks owned and operated by the tribes puts them at odds with the operators of California cardrooms, who have been making their own push for sports betting in the state. The two groups have struggled in the past over player-banked table games, which the tribes contest have taken away from their business and violated their exclusivity agreements for gaming. The conflicting interests of the group mirrors their ongoing debate over online poker, which could mean the prolonging of a decision over the best way to legalize sports betting within the state. The legalization of sports betting echoes these past arguments, as the Native American tribes push for legalization of sports betting through in-person retailers. Their proposal seems to directly oppose any online or mobile betting, which means sports betting could be less accessible.

With so many conflicting views surrounding sports betting in the state of California, it is tough to say whether or not legalization can come in a timely manner. Over a dozen states have already legalized sports betting or proposed some form of sports betting, and many are moving forward with those proposals within the next year. There is one thing the aforementioned groups agree on: sports betting should be legalized in order to prevent unlawful operations. If the tribes get their way, the proposal will give them exclusivity over legal sports betting, and all bets would have to be made in-person. The tribes believe that they can get the signatures necessary to put the proposal on the ballot for next year’s election. At that point it will be up to voters to determine whether or not in-person sports betting can contend with illegal online operations which have already established themselves as a more accessible option.