It seems as though sports and sports betting have been engaged in a complicated relationship since the very first sporting event was held. Over time, sports betting has brought about challenging ethical questions like “Who should be allowed to bet?” and “How will betting impact the sport?” For years, sports betting was banned in the United States, but a 2018 Supreme Court decision overturned that ban, bringing these concerns to the fore once more. Just this past week, a player in the National Football League was suspended for the remainder of the 2020 season after placing bets on games across the league. This suspension has done nothing to silence the debate about appropriate practices for sports betting and people are once again directing their attention to these ethical issues.

Details of the Incident

Josh Shaw is a defensive back for the Arizona Cardinals who has been on injured reserve with a shoulder injury since August 25. Shaw has not played a single down for his team this season, but that doesn’t give him the right to place bets on any of the games. The NFL has a strict gambling policy that prohibits athletes, coaches, officials, and other professionals employed by the league from betting on games. Although the NFL has banned its employees from betting, more than a dozen states have legalized sports betting, making it readily available to people across the country. Sources say that on Sunday, November 10 Shaw placed a three-team parlay at Caesar’s sportsbook in Las Vegas. Shaw’s bets were on the second half of three games in Week 10, including the Cardinals game against the Tampa Bay Buccaneers. Shaw’s bet lost, and Caesars contacted the NFL shortly after Shaw placed the wager. Nevada gaming regulations require sportsbooks to avoid accepting wagers by any professional athlete or coach, and Shaw listed his occupation as “professional football player” when filling out his application to open an account at Caesars. Shaw’s suspension was issued shortly after the NFL conducted an investigation to verify that he did in fact place the wager.

In a statement released by the NFL, Commissioner Roger Goodell cited those timeless ethical concerns surrounding sports betting. Goodell emphasized that the success of the NFL depends on the preservation of the integrity of the game, and whenever an employee of the league bets on a game that integrity can be compromised. Players or coaches could very easily have access to information about teams and matchups that the common bettor would not be privy to. What’s more, players could even go as far to impact the outcome of the game through their own actions, or by encouraging others to act in a way that could influence an individual match. 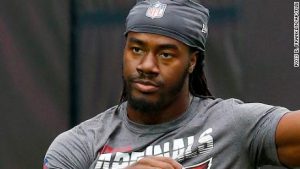 The NFL’s investigation into Shaw’s betting revealed that Shaw did not involve any of his teammates or coaches in the bets he made. Additionally, he never used his position to help him gain inside information that would help him win the bets that he placed. Most importantly, the outcome of the games that Shaw bet on were not affected in any way by the bets that he placed. It is important to note that Shaw’s suspension is through the 2020 season but could last longer than that. He is able to appeal the suspension, but if that appeal fails, he would have to wait to petition for reinstatement on February 15, 2021.

Shaw is not the first player to be caught placing bets in the NFL, but the most recent incident of sports betting by a player dates back more than 20 years. In fact, only four players in the history of the league have faced suspension for betting. Despite the fact that these incidents are infrequent, they certainly raise many concerns for a league who is known to struggle with discipline issues. The NFL is often in the news for issues of domestic violence, substance abuse, and other issues. The fact that gambling has become legal in many places throughout the country means that sports betting can now be added to the list of issues for the league. These concerns continue to mount, while the league has begun to accept sponsorships from fantasy sports companies, casinos, and state lotteries for the first time. Ironically, Caesars Entertainment, who is responsible for operating the sportsbook where Shaw placed his wager, was just announced this past January as the league’s official casino partner.

Shaw has been no stranger to controversy either. During his college years he was suspended for fabricating a story about an ankle injury he picked up. He claimed to have injured his ankle rescuing a family member, but actually hurt it falling off a third-floor balcony. Shaw was drafted in 2015 by the Cincinnati Bengals, and he has since played for the Kansas City Chiefs and Tampa Bay Buccaneers before being picked up as an unrestricted free agent by the Cardinals this year. Shaw may never have the opportunity to play professional football again, given the severity of the suspension and his history, but the larger issue is that the NFL is faced with a problem that is more prominent than four total suspensions would suggest. It is possible that Shaw’s suspension could force the league to take a closer look at whether or not sports betting is widespread now that it has become more available. What’s more, it’s forced the league and the public to readdress those timeless ethical questions.