After much debate in recent months, Colorado residents will finally have the opportunity to vote on the legalization of sports betting within the state. The Colorado Proposition DD would bring legal sports betting to the state with a 10% tax that would be dedicated to environmental programs. As it stands, the state of Colorado offers limited gambling and gaming options to its residents, including casinos with slot machines, poker, and blackjack. Gaming was first legalized in Colorado in 1991; this November, voters have the opportunity to expand these gaming opportunities, by voting for Colorado to become the 20th state to legalize sports betting.

How Does Proposition DD Change Gambling in Colorado?

On November 5, residents of Colorado will vote for or against Proposition DD. If residents vote in favor of legalizing gambling in the state, then the new law will go into effect as of May 2020. Bettors would be given the option of placing a variety of sports wagers at casinos throughout the state. The new law would legalize betting on professional and college sports, Olympic games, motor sports, and esports contests; these changes would be in addition to the legal horse and dog racing gambling that is already available in off-track locations within the state. One of the only exceptions to legal sports wagering would be the limitation of individual player prop bets for collegiate athletics, which is more or less the standard in states where sports betting has already been legalized.

Fantasy sports, which were legalized in 2017, are unaffected by Proposition DD. In other words, no additional taxes are to be expected from existing fantasy sports games. While many states have already adopted online sports gambling applications, Colorado Proposition DD would restrict sports gambling to three licensed casinos: Black Hawk, Central City, and Cripple Creek. That being said, in time it is likely that these casinos would adapt to offer in-person and online betting options, potentially through sportsbook applications such as FanDuel.

Gambling with a Purpose

The initial conversation surrounding Colorado’s interests to legalize gambling mirrored the many other states who have been wrestling with the possibility since the U.S. Supreme Court decided to lift the prohibition of sports wagering in 2018. Concerns were raised about the proper rules and regulations that would be introduced if sports betting was legalized, as well as potential concerns for a rise in gambling addiction. In addition to these issues, residents and policymakers alike feared that the revenue generated from legalization would not do anything to serve the state’s economy or its residents. The early indication is that Proposition DD will address a number of these concerns, in hopes that residents will welcome these gaming changes with open arms. 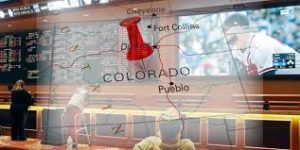 The Aspen Times reported that the goal of Proposition DD is to help close the $3 billion state funding gap for the implementation of the Colorado Water Plan. The proposed 10% tax on sports gambling would have an annual cap of $29 million a year from casino sports-betting revenue. The largest percentage of the money from the 10% tax would go towards funding environmental programs. This includes programs like the Colorado River Compact (CRC), which is a program that benefits Colorado and its surrounding states by providing over 7 million acre-feet of water each year to Lake Powell. Lake Powell is a reservoir that crosses the border between Colorado, Arizona, and Utah, and the CRC includes contributions from other surrounding states as well. In order to meet the goal of providing such large quantities of water, the Colorado Water Plan aims to provide incentive for residents, farmers, and businesses to reduce water consumption.

A smaller percentage of the money taxed would go to gambling addiction services, while another portion would be directed to a “hold harmless fund,” which is a legal agreement that allows bettors to seek compensation if they can prove sports gambling damaged their financial well-being.

While the prospect of using the tax on sports gambling to cover the fund for this program is appealing, it can hardly cover the $3 billion gap in funding. Early projections suggest that if sports betting were legalized in May 2020 then it could be expected to generate roughly $10 million in its first year of legalization. In following years, it would be expected to plateau around $15 million. While this does not cover the large lack of funding for the Colorado Water Plan, it is refreshing to see that the state is using gambling in a way that could benefit the state and its residents.

Opposition to the proposed legalization argue that the burden of the Colorado Water Plan should not fall to those who are interested in betting on their favorite sports. Additionally, environmentalists have raised their concerns about the negative effects of future gaming expansion projects that could lead to pollution or the damaging of the existing natural areas within the state. Despite these concerns, it appears that Colorado residents have met Proposition DD with an open mind. Additionally, the benefits of Colorado’s Proposition DD could provide a model of responsible gaming laws for states that are still on the fence about the benefits of legalization. For now, residents will wait until November 5 to see the where the state’s sports betting plans are headed.