Rivers Casino in Pittsburgh Pennsylvania unveiled its $5 million BetRivers Sportsbook on Monday afternoon, offering bettors an array of new amenities to enjoy while placing wagers on their favorite sports teams. Rivers officially began offering sports betting in December, but the temporary sportsbook paled in comparison to the state-of-the-art lounge that was unveiled on Monday. The new sportsbook allows bettors to place wagers on a variety of sports and was open just in time for patrons to place wagers on the Monday Night Football match-up between the hometown Steelers and the Cincinnati Bengals, who were playing just a few blocks away at Heinz Field.

The new BetRivers Sportsbook covers 5,500 square feet, which is about twice the size of the sportsbook area that opened in December. The renovations for the new sportsbook lounge and surrounding areas, which was formerly home to Levels Lounge, cost roughly $5 million. The new area is home to 24 86-inch high-definition monitors, as well as two LED monitors that measure 7 feet tall and more than 50 feet wide. The screens are positioned to offer nearly 360 degrees of live sports action to bettors in the surrounding areas. The large monitors are designed to show at least four games at once, on a screen that is divided into quadrants. Surrounding the screens is seating for up to 195 guests. 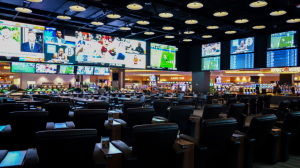 Outside of the seating area, bettors have the option of placing their wagers at six sports writer windows or 27 self-service kiosks. Throughout the casino’s gaming floor, bettors will also find an additional six kiosks at which they can place their sports wagers. Alongside the unveiling of the sportsbook, Rivers also took the opportunity to unveil changes and upgrades to the surrounding areas, which give bettors a view of all the live sports action. Just outside of the sportsbook seating area is a new bar that seats up to 34 guests. Additionally, the upgraded 55-seat digital gaming section for blackjack, roulette, and baccarat, all with live dealers, are just within reach of the new sportsbook space. Although Monday was the official opening of the new lounge, it is expected that future changes could be in store for the BetRivers Sportsbook. Officials have mentioned a number of new additions that bettors could enjoy in the near future, such as food kiosks with servers and reservable booths.

Rivers general Manager, Bill Keena, spoke with the Pittsburgh Post-Gazette about the immediate impact he has seen from the new sportsbook lounge. Keena credited the sportsbook for bringing in a younger demographic that would otherwise be lost in the shuffle at Rivers casino. This demographic was a big part of the crowd during sportsbook’s soft opening this past Friday. Sports wagering brings in bettors from all age groups and has led to day to day increases for table games, slots, and food and beverage revenues, according to Keena.

The opening could not have come at a better time, as the Steelers hosted the Cincinnati Bengals with both teams in search of their first win of the season. On Monday afternoon, the Steelers were 3 ½-point favorites and 85 percent of the wagers placed were for the Steelers to cover the spread or win outright. The new BetRivers Sportsbook was packed later that evening, as the Steelers defeated the Bengals by a score of 27-3, to the delight of the majority of the bettors. Rivers casino will be pleased as well, as sports betting continues to grow in popularity with the help of its new sportsbook. Between the months of November and June just last year, Rivers brought in more than $58 million from in-person and online sports betting. The addition of the BetRivers Sportsbook hopes to build upon the already impressive revenues.