As sports betting grows in popularity throughout the United States, four of Atlanta’s professional sports teams have voiced their opinions about legalizing sports betting in the state of Georgia. The presidents of the Atlanta Braves, Atlanta Falcons, Atlanta Hawks, and Atlanta United have formed the Georgia Professional Sports Integrity Alliance in hopes of encouraging lawmakers to take action. The group recently sent a letter to state legislators, urging them to legalize both online and mobile sports betting. Now officials are feeling the mounting pressure to make a change to bring a significant gambling expansion to the state of Georgia.

The presidents of the teams represented by the new coalition have joined forces in hopes of addressing sports betting in the state of Georgia, which has been an ongoing point of interest as more than a dozen states have legalized some form of sports betting throughout the country. The goal is simple: regulate sports betting and create revenue for the state. The letter cites the fact that Georgia is the 12th largest state for illegal wagering, suggesting that it is past time legislators take action to ensure that sports betting activities are taking place in a controlled environment for the safety of vendors and bettors alike. The belief is that by addressing illegal sports betting activity, legislators can ensure the safety of its citizens while preserving the integrity of the sport. While the individual sports teams would not directly benefit from the revenues generated from potential sports bets, they would expect viewership and interest in the games to increase if fans were given the option to bet on games.

For years, Georgia has looked into gambling expansions through a constitutional amendment but has failed to meet the required support. In the state, such an amendment will only pass with two-thirds support in the Legislature, which would then require support from the majority of Georgia Voters. Even the Supreme Court’s 2018 decision to allow sports betting in the United States wasn’t enough to spur change in the state, and now this coalition of professional sports leaders believes a change must be made. In their letter to lawmakers, the coalition suggests that a lower threshold of support must be accepted in order to bring sports betting to the state. 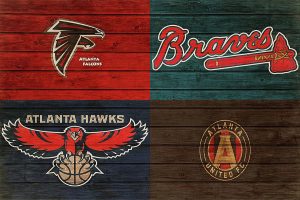 Legislature has already felt the mounting pressure for gambling expansion in the state due to citizen interest in casinos and horse racing. Now the Supreme Court’s decision and the coalition of sports professionals brings additional pressure. Tennessee, Georgia’s neighbor to the north, has already legalized sports betting. Georgia House Speaker David Ralston has voiced his own opinion, saying that Tennessee is usually the last state to adapt to change and that it’s time Georgia explored its own gambling expansion options. Over the past few months, Georgia lawmakers have been studying sports gambling in Tennessee and other states who have adopted sports betting, in hopes of developing their own plan for expansion.

The Pros and Cons

Despite obvious interest throughout the state, there are still concerns surrounding the legalization of sports betting. Virginia Galloway, a lobbyist with Georgia Faith and Freedom Coalition, voiced her opinion of the new coalition and what it could mean for the state. Galloway cited many known issues surrounding gambling, such as addiction and social issues, suggesting that sports professionals were looking to take advantage of hard-working Georgians. Galloway’s comments echo those of the many religious groups and people who stand in opposition of a gambling expansion, believing that such a decision could lead to an increase in crime and other unwanted behaviors. While there may be a contingent of people who lend voice to Galloway’s concerns about predatory gambling practices, there are many who would argue just the opposite.

The sports coalition noted that they are not suggesting the introduction of an entirely new industry; there is no denying the existence of the underground gambling that takes place throughout Georgia. As it stands, that industry is operating without any safeguards against the very things the Galloway fears. The legalization of sports betting would hopefully address some of these issues, and the coalition believes that it could also generate nearly $50 million in annual revenue. Part of the money generated would be funneled through the Georgia Lottery-funded HOPE scholarship, which benefits Georgians. In addition to the enticing revenue, a gambling expansion including sports betting would generate a significant number of jobs.

Governor Brian Kemp recently called for a cut in state spending, which many believe is an indication of the intent to push for a significant gambling expansion in 2020. As it stands, a constitutional amendment would require the support of 120 state representatives and 37 senators and potentially support from the majority of voters in the state. In the coming months, the sports coalition hopes to continue to encourage change in their state.