On Friday, Governor Janet Mills announced her decision to veto a bill that would have legalized sports betting in the state of Maine. Lawmakers within the state have been working diligently to put together legislature that would allow the state to become the third in the New England region to permit sports betting. Despite their best efforts, Mills announced in a letter her decision to block the bill from passing, citing a number of concerns surrounding the proposed legislation. In response to the bill’s veto, lobbyists for the sports betting industry are focusing their efforts on appealing to lawmakers in order to override Mills’ decision.

Mills’ Praise for the Bill

Mills’ letter was issued on Friday and addressed to the legislature of the state. She began by acknowledging the Supreme Court’s 2018 decision to allows states to develop their own laws regarding sports betting. Since this decision, 14 states have chosen to create their own laws, and the sports betting industry throughout the country has blossomed. Within the New England region, Rhode Island and New Hampshire have already legalized sports betting, hoping to capitalize on what has proven to be a lucrative industry in other areas of the country. 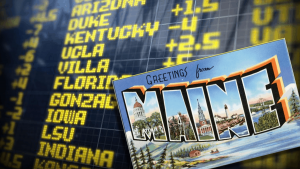 Mills acknowledged that the proposed legislation was a “good effort,” and stated that she respects the time that law makers put in to make this legislation a reality. She went onto praise the individuals who worked on this effort in order to end illegal gambling operations that have been taking place for years. She finally stressed the importance of finding a balance between regulation and taxation, in order to maintain the interests of the state.

However, Mills reasons for vetoing the bill outweighed her support of it. Her concerns focused on the bandwagon effect that is taking place throughout the country, as more and more states dive into the emerging sports betting industry headfirst. Mills feels that many of these decisions are being made without taking proper precautions in ensuring the safety of the state and its residents. Jumping headfirst into legalization without first taking inventory of the success and failures of other states would be a costly error, Mills believes. These factors ultimately forced her to make the decision to veto the bill.

While the proposed legislation stated the legal betting age would be 21 or older, Mills believes that young people could still slip through the cracks. More importantly, she felt that advertising was often directed toward a younger audience. While regulations may be strict within the state, Mills fears that national marketing campaigns could extend their influence into Maine, reaching underage residents.

Revenue is one of the largest driving forces in the debate surrounding the legalization of sports betting. States believe that through regulation and taxation of sports betting they can benefit from the revenue produced, which is often projected to be millions of dollars. Mills, however, has cited the fact that many states, including Rhode Island, have fallen woefully short of these projections.

Future of Sports Betting in Maine

Proponents of sports betting legalization will be discouraged, as states throughout the New England region and the country continue to pass gambling expansions. New Hampshire, whose sports betting just went live at the start of the new year, has already seen 16,400 registered accounts with their partners, DraftKings. From those accounts more than $3.44 million was wagered in the first week of legal sports betting. While it is too early to say with any certainty, the legalization of sports betting in that state seems to have been a good choice.

Despite the veto, supporters of the bill should not lose hope just yet. Mills’ veto can still be overridden, but it would require approval from the Senate. The only roll call vote for the proposed legislation saw the Senate approve the bill with a vote of 19-15; in order to override Mills’, veto those 19 votes would have to become 24. If they motion to override does not get enough votes, then legislators will have to reconsider their approach to legal sports betting within the state.