Over the past two years, the gambling landscape in Illinois has evolved to welcome a number of new wagering options for residents, including the introduction of online and in-person sports betting. The trend is a reflection of a national acceptance and embracing of sports wagering throughout the United States, as the industry continues to boom. A year after the first sports wager was placed in the state, Illinois is now opening a new sportsbook at Fairmount Park, just in time for the NCAA March Madness Tournament.

FanDuel, one of the most popular online sportsbooks in the budding industry, held an opening ceremony on Monday for its new sportsbook at Fairmount Park in Collinsville, Illinois. Over the past year, in-person sports wagering has fallen to the wayside due to sweeping health restrictions put in place to combat the pandemic. Now, as the country slowly begins to rebound and many people are getting vaccinated, restrictions are loosening, and businesses are beginning to reopen. Although Monday’s opening ceremony was not a traditional grand opening, it was a step in the right direction for the new sportsbook, which is officially accepting wagers. 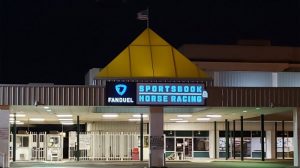 Fairmount owner William Stiritz and Associates agreed to a partnership with FanDuel back in November. Under the agreement, the two pledged to expand the horse track and rebrand it as “FanDuel Sportsbook & Horse Racing.” FanDuel agreed to a multimillion-dollar investment that includes the sportsbook, and a number of other upgrades that they have since made to the facility. Many improvements have already been made, and the horse track and sportsbook now span nearly 2,500-square-feet, with a 98-inch video screen, 24 65-inch video displays, five live betting windows and 22 self-service betting kiosks.

The ceremonial first bet was officially placed by Baseball Hall-of-Famer Ozzie Smith, who placed a $20 bet on the St. Louis Cardinals to win the 2021 World Series at +2200. If the bet hits, the total payout would be $460.

The timing of the opening FanDuel Sportsbook & Horse Racing could not have been better, and it’s a savvy move from an industry-leader like FanDuel. Jeff Lowich, FanDuel’s senior director of retail operations, referred to the opening as a way to “strike while the iron is hot,” referring to the March Madness tournament, which starts late this week. The tournament is one of the most lucrative opportunities for sports betting in the calendar year, and after last year’s tournament was canceled due to the pandemic, many people are eager to make up for lost time. According to the American Gaming Association, nearly 47 million Americans are expected to make wagers on the March Madness tournament, and Fairmount Park is going to be one of the many places they can place their wagers.

Three years ago, betting on the tournament would not have been possible. The legislation for sports betting in Illinois was official signed into law by Gov. J.B. Pritzker in June 2019, paving way for the first wagers to first be placed on March 9, 2020. The timing of the first wager seemed to bode well to the start of a new industry that could hit the ground running with March Madness starting. The COVID-19 Pandemic had other plans, however, and health restrictions limiting in-person betting led to another change in Illinois gaming laws, permitting bettors to create online sports betting accounts through an executive order signed by Pritzker. Now Illinois hopes that the 10 retail locations for sports betting can finally begin to open safely, so that residents can finally take advantage of the relatively new legislation.

Illinois has already had a record-breaking start to 2021 in terms of sports betting. In January, the state handled $581.5 million in wagers, generating $49.4 million in revenue. From that, the state was able to collect $7.2 million in taxes. Although sports betting is still in its infancy in the state of Illinois, many big contenders are already making a name for themselves. DraftKings, BetRivers, PointsBet, and Barstool Sportsbook have already gained a foothold and contributed to the big revenue numbers in 2021, and many believe that these numbers will continue to grow, as Illinois gaming expands throughout the year.