Within the year, residents of Illinois will be able to start placing sports bets at their local convenience stores. Gamblers throughout the state could have access to a new lottery sports wagering pilot program at 2,500 gas stations, convenience stores, and other retailers, with the option of adding an additional 2,500 retailers following suit in the second year.

The unique program follows the bill announced earlier this summer, which legalized sports betting within the state. Not only that, the landmark piece of legislation is widely regarded as being one of the most aggressive and expansive sports betting bills the US has seen since the overturning of PASPA by the US Supreme Court last year. 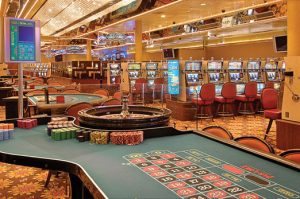 Over the past few months the State has introduced sports betting at its casinos, while also announcing the establishment of six new casinos along an increase in availability of video gaming terminals throughout the state. The pilot program for a lottery sports betting system is the first of its kind within the United States.

Like other lottery programs throughout the country, gamblers aged 21 and older will be able to place their bets at electronic kiosks at retailers throughout the state. The new lottery sports program will give residents the opportunity to pick the outcome of multiple games as part of a single bet, otherwise known as a parlay. The bettor must select all of the correct outcomes in order to win. This type of parlay wager was not possible until the U.S. Supreme Court’s decision made last year to legalize sports betting throughout the country.

In wake of this monumental decision, a number of states have made the push to legalize and regulate sports betting within the past year. However, many states have chosen to implement sports betting through brick-and-mortar casino sportsbooks or online betting platforms rather than a lottery system. Delaware is the only state to have a comparable parlay-only lottery system, which brought in over $6 million last year. This system, however, requires a $2 minimum wager on parlay bets for only NFL and collegiate football. The new sports-betting system in Illinois has the opportunity to expand on this, in order to make a wide variety of parlay bets readily available.

The pilot program in Illinois is projected to cost nearly $20 million, a large portion of which stems from a steep licensing fee. Despite high initial costs officials estimate that the sports-betting industry within the state could generate $58 million to $128 million annually. The Chicago Sun Times reported that Illinois Lottery general counsel Cornell Wilson is turning to other states in order to research the most effective ways to implement and launch this new program. The plan is set to role out with little to no threat to business for large casinos and sportsbooks, who offer more variety and better odds for sports betting. Rules and regulations surrounding the parlay lottery kiosks still need to be established, and no concrete time table for the official launch of the program has been established.

In the end, Illinois is moving closer and closer to the full-scale mobile betting we see in states like Pennsylvania, West Virginia, and New Jersey. This is nothing more than the state lottery’s attempt to get in on the action. Being that licensing fees for the parlay-only product are massive ($20 million), it goes without saying that one of the bigger sportsbook operators will lay first claim to it.