The voters in Maryland will see a ballot question in November regarding the legalization of sports betting. Question 2 will state plainly, “do you approve the expansion of commercial gaming in the State of Maryland to authorize sports and events betting for the primary purpose of raising revenue for education?” If the ballot measure should pass, the Maryland legislature will work to lay out a framework for the industry in the new year.

Senator Craig Zucker of Montgomery sponsored the recent legislation. “I feel like we would have had a more comprehensive piece of legislation to present the voters had a global pandemic not happened.” He went on, “we just made a judgement call to get it on the ballot and allow voters to have their say.” The legislation he proposed included mobile wagering as well as 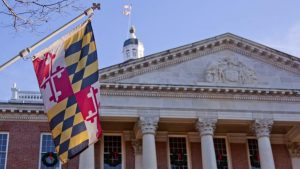 brick and mortar sports betting instillations. His bill passed the state Senate unanimously however, the House was only able to approve a paired down version before the legislative session was ended early due to the Covid-19 pandemic. Senator Zucker expects that the mobile gaming issue will ultimately be approved. “I can’t imagine a scenario where we wouldn’t allow mobile betting. Eighty to ninety percent of sports betting is done online.”

Industry experts have estimated that legal sports betting could raise annual revenues for the state of roughly $20 million. Both the legislation and ballot question itself specify that these funds would be set aside for state education initiatives.

“Given the horrific economic impact of Covid-19, any additional revenue that we can get that would help toward education is important,” said Senator Zucker. This is a key time for the state to be raising education funds. Just this past March, the state legislature passed the Blueprint for Maryland’s Future, a bill aimed at education reform in the state. The bill was comprised largely of recommendations by Maryland’s Commission on Innovation and Excellence in Education. Unfortunately, the economic downturn associated with the Covid-19 pandemic put pressure on lawmakers to keep spending down. Governor Larry Hogan vetoed the multimillion-dollar bill in Spring of this year.

Not all lawmakers were behind the bill. Delegate William Wivell voted against the sports betting legislation and was one of only three legislators to do so. “The legislature has a spending problem, and the amount of revenue that’s going to be generated by sports betting is not going to bail them out of that problem,” said Wivell. He also expressed concern about widening the scope of gambling within the state. “I just think at some point we have to set limits on what we’re gambling on. We don’t have to bet on everything.”

Sports betting is a major industry in the United States and several states have taken active measures to bring the practice under a legal framework. New Jersey, Pennsylvania, West Virginia, and Washington D.C. have legalized sports betting as has Delaware and Virginia. Many in the state of Maryland do not want to be left behind and lose out on beneficial state revenue streams. “I hope Maryland voters approve this, because if we don’t get this done in November, by the time voters have an opportunity to vote on it again, maybe 75% of all states in the U.S. will have sports betting up and running,” said Senator Zucker.