On Monday, July 13, Michigan’s Four Winds Casinos officially launched their Four Winds Sportsbook. The three Michigan locations marked this momentous event with special guest Steve Mongo, Super Bowl Champion and ESPN personality, who appeared at Four Winds New Buffalo to place the ceremonial first bet at the new sportsbook. Mongo, a former defensive lineman for the Chicago Bears, put $20 on the Bears to win the Super Bowl this season. The bet marks the official launch of the Four Winds Sportsbook at the New Buffalo, Dowagiac, and Hartford locations. The new sportsbook gives resident access to sports betting for the first time, as professional sports begin to start again after a lengthy hiatus due to the COVID-19 Pandemic.

Details About the New Sportsbook

A month ago, the Four Winds Casinos reopened their doors after an unprecedented closure caused by fears surrounding the coronavirus. The casinos closed in mid-March when they were originally planning to launch their sportsbook alongside the NCAA March Madness Tournament. Now, as the casino reopens and sports are returning to play, guests can visit the sportsbook and begin placing wagers on popular sports, such as basketball, football, hockey, baseball, soccer, and much more. The launch of the new sportsbook comes at the perfect time, as many of the professional sports leagues throughout the United States are prepping for their return to play after the coronavirus pandemic brought all leagues and preseasons to a halt back in March. 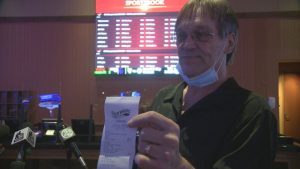 The Four Winds casinos, which are owned and operated by the Pokagon Band of Potawatomi, have chosen to partner with Kambi to deliver their new product. Kambi is a well-known provider of sports betting services and is renowned for their excellence in providing software that offers odds compiling, as well as risk management. The company has partnered with other industry leaders, including DraftKings, Rush Street Gaming, and Penn National. The partnership between Four Winds and Kambi was approved by the Pokagon Gaming Commission and the Pokagon Gaming Authority. Tribal Council Chairman and CEO of the Pokagon Gaming Authority Matthew Wesaw expressed his excitement in adding the new sportsbook to the list of amenities at the existing Four Winds locations.

In order to place a wager at the Four Winds Sportsbook, bettors must scan a QR code on their phone. This QR code will give them access to another code that they can present at any of the three Four Winds locations in order to place a bet with their account. Guests can also place wagers at the 18 kiosks at the New Buffalo location or at the six kiosks at Dowagiac or Hartford locations. Frank Kennedy, Four Winds senior vice president of casino operations, praised the new sportsbook as an opportunity to tap into a new demographic of bettors.

Growth of Gambling in Michigan

Much of the gambling available in the state of Michigan is possible due to the Indian Gaming Regulatory Act. Under this act, residents can enjoy Native American casinos on land that is owned by the tribes within the state. In addition to the Native American casinos throughout the state, residents have the ability to place wagers on horse racing at tracks and primutuels throughout the state. Although the Supreme Court lifted the national ban on sports betting in 2018, it wasn’t until recently that Michigan added legal sports betting to the mix of available gambling options.

In December, Governor Gretchen Whitmer signed a bill that legalized sports and online gambling. The bill allows for sports betting, but only on wagers that are placed in-person at licensed casinos. Residents who are interested in online or mobile sports betting will have to wait for the time being, but officials believe that those options could become available in the near future. There has also been speculation that the Four Winds casino located in South bend could add a sportsbook to their casino before the end of the year, but officials do not have an update on the status of that at this time. In the meantime, bettors will have to take advantage of the newest sportsbook at the three Four Winds casino locations.