Washington D.C. has yet to officially launch any form of sports betting, despite the fact that it was legalized over a year ago. Now, amidst the postponement of all professional and collegiate sports due to the coronavirus, the nation’s capital will have to wait even longer for its first highly anticipated sportsbook. After much deliberation and tireless efforts throughout the development of the city’s first sportsbook, it appeared as though residents in D.C. were primed for access to sports betting in early March, just in time for March Madness. However, as the world of sports continues to submit to the will of the ever-growing concern surrounding Covid-19 it appears that sports betting in Washington D.C. must be postponed indefinitely.

The Long Journey to Launch

As the nationwide shutdown began on Friday, March 13, the Office of Lottery and Gaming confirmed that it would be launching its citywide mobile sports betting app and website before April 1. At the time this announcement was made, the NCAA had already canceled one of the biggest sporting events of the year: the NCAA March Madness Tournament. During this time, it also became clear that major professional sports leagues throughout the United States, such as the NBA and NHL, would be forced to suspend competitions, with the start of the MLB season also hanging in the balance. The Office of Lottery and Gaming fully recognized that their sportsbook would be launching in a world devoid of sport, but it seemed that the launch would resume as planned, if only to finalize a project that had taken over a year to complete. 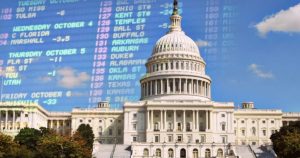 In January of 2019, Mayor Muriel Bowser officially legalized sports betting in the District. Since then, officials have worked tirelessly to come up with a sportsbook that they feel is satisfactory when it comes to offering regulated sports betting options to bettors, in hopes of producing revenue for Washing D.C. The final product, a collaboration between Greek gambling company Intralot and the D.C. Lottery, was primed to fall woefully short of the anticipated offerings for their opening day, which was scheduled for mid to late March.

As the coronavirus pandemic continues to plague the globe, the Office of Lottery and Gaming has been forced to delay the launch of their sportsbook even further. In a statement issued by a D.C. Lottery spokesperson, the launch of the sportsbook has officially been delayed indefinitely. The spokesperson emphasized that the mobile app and website have gone through the necessary tests to be ready to go live at the drop of a hat, yet the ongoing suspension of professional sports on a global scale has led the office to determine that a launch at this time would be counterintuitive.

The launch of the sportsbook at this point could potentially cost more money than the app or website would produce in revenue, which is highly disappointing considering the lofty projections for the industry. Officials had estimated more than $26 million in revenue this year, and that figure was set to increase in the coming years. The effects of this financial impact are certainly concerning, especially considering the hit that Intralot could be taking from the loss of revenue from other projects throughout the nation.

No End in Sight

The recent events leading to the indefinite delay of sports betting launching in D.C. will certainly hurt officials and sports betting enthusiasts alike. On the heels of the launch of the first online and mobile sportsbook was the expected launch of in-person sports betting for the District. A number of applications for sports betting licenses at professional sporting arenas like Capital One Arena and Audi Field had been in the works prior to this nation-wide shut down. At the time these applications were submitted, it was expected that such licenses could be issued before the 2020 NFL season. It appears that the effects of the suspension of all professional sports will force those decisions to be delayed as well.

As the world continues to adjust to the changes that have been forced by the outbreak of the coronavirus, officials in D.C. will await the decision by professional sports leagues to determine the next steps for sports betting in the District. For the time being, the Office of Lottery and Gaming has committed themselves to offering updates about the status of their mobile app and website, promising that when the time comes, they will be ready to launch the highly anticipated product.