Last Sunday marked one of the biggest sportsbook losses in Las Vegas history, all thanks to an error made by bookmakers. Nearly a quarter of a million dollars in winning wagers were placed at MGM Resorts on Sunday, and all of these bets were made after the sporting events had started. Bookmakers are calling this the largest loss in the history of Vegas sportsbooks, but the error that was made is more common than some may think. Now, some people are questioning whether there will be any repercussions for those who took advantage of the mistake.

When entering the odds for various sporting events, oddsmakers often enter the start times of manually; this was the case for a number of Korean and Chinese baseball games that were open for wagers on Sunday. The issue arose when the start times were entered incorrectly, giving bettors the opportunity to place wagers that were supposed to be available only before the game after the game had started. 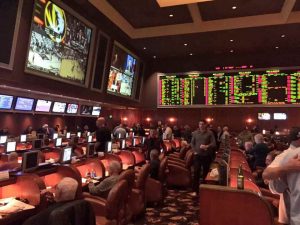 The error presented bettors with the unique opportunity to take a look at the games in play and determine the outcome of the games based on the live scores and events taking place in each match. Although many sportsbooks typically offer live betting, they do so with odds that are adjusted to account for the events taking place within each match. This time, however, the odds remained static, due to the fact that the manual start time entry made it seem as though the games had not begun. Bettors were quick to spot the error and did everything they could to capitalize on the mistake.

Nearly 50 bets were placed in order to take advantage of this mistake, many of which were placed through the self-serve kiosks at the Bellagio resort between 1:30 a.m. and 3:00 a.m. The games in questions were baseball games from the KBO League and the Chinese Professional Baseball League. The games start times were 1 a.m. and 2 a.m., but the books had them listed much later, making it easy for bettors to hand-pick the bets that were most likely to hit.

In the game between KT Wiz Suwon and Hanwha Eagles, the over was set to 9.5 runs. When Suwon scored five runs in the first inning, many bettors realized that the over was likely to hit, and so they placed their wagers. Over 9.5 runs hit in the seventh inning, and the game ended 8-4 in favor of Suwon. The NC Dinos and the Doosan Bears were being shown on ESPN, with the under set a 9 runs for -110. The game was 0-0 until the 5th inning, and bettors again took advantage of the opportunity by taking the under.

Single bets were the least of bookmakers’ concerns. One $250 wager on a 10-leg parlay ended up paying out more than $137,100 to one lucky bettor. Another $100 eight-leg parlay won $11,156.60. These creative parlays are just a few examples of how bettors were able to cash out on one of the biggest bookmaking errors in the history of Las Vegas.

Winnings Hang in the Balance

Errors from manual entry occur quite frequently, but not with losses of this magnitude. A number of bookmakers in the industry spoke out about the incident, claiming that the occurrence is quite common. The issue, of course, is that a loss this great can hardly be chalked up as a typo from which bookmakers can move on. Now, The Nevada Gaming Control Board is stepping in, and many are wondering whether or not these winnings will be rescinded.

Whenever a dispute in excess of $500 occurs, The Nevada Gaming Control Board is required to launch an investigation. In these circumstances, the board will conduct their investigation, ultimately deciding whether or not bookmakers need to payout the bets in dispute. This could mean that the opportunistic bettors that took advantage of this mistake could be left with no winnings from the wagers they placed. It is common practice within the industry to give patrons the option of refunding their tickets or keeping their winnings under the condition that they will be permanently banned from the sportsbook. Given the choice, one would think that these lucky bettors would gladly take their winnings to another sportsbook, but for the time being they must wait for the decision from the board.