Due in large part to the economic effects of Covid-19, the state of New York has seen a marked drop in income tax revenues. In addition, gas, sales, and just about every other business and personal tax base have slipped as well. Online sports betting may be the solution the state is looking for to increase revenue in light of the current economic climate.

Assemblyman Gary Pretlow, Democrat from Westchester County and lead sponsor in the Assembly for an online sports betting bill stated, “it’s going to happen.” And he is not alone. Supporters of an online wagering bill in New York say that this is the moment to push for legalization after years of effort. As lawmakers return to session in the hopes of balancing the 2020 budget, proponents look forward to a move towards legalization of online sports betting.

However, the issue is far from settled. Governor Andrew M. Cuomo has been firm in his belief that such a move towards legalization cannot simply be passed by the state’s lawmakers. Rather, legalization would require ratification through a multiyear constitutional amendment process; including a statewide referendum by New York residents. State lawmakers also share concerns that the proposed revenue sharing plan allows gambling institutions to make too much profit at the expense of funds that could otherwise be used towards the state budget. Others are concerned that the state already holds too many opportunities for gambling. “How many times have we heard that gambling is going to be good for state revenues? We OK’d casinos and then they ran deficits,” said a state lawmaker on the condition of anonymity.

How They Plan to Make it Happen

Revenue-raisers or tax hikes have been the subject of talks to reconvene lawmakers in an attempt to reduce the state’s roughly $13 billion budget deficit. Those talks include the possibility of raising taxes on the wealthy and some state corporations. The alternative would be to cut funding towards public schools, healthcare services, and nonprofits which provide critical state services.

The decision will turn in large part on the outcome of talks at the federal level as to how much unrestricted money will be released to states like New York. If Republicans and Democrats in Washington, along with President 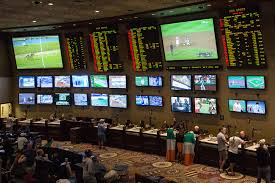 Trump, can find a way to provide more federal money to states, New York may not be forced to turn to other revenue enhancements such as new taxes or cut spending.

While sports betting is legal at brick and mortar locations in New York, all, except for Native American casinos, are currently closed under the state’s response to Covid-19 public health concerns. Here lies the advantage in permitting online sports gambling. Even with the limited MLB and a an altered NBA season, online sports betting has the potential to generate huge revenues on everything from cricket and soccer, to darts.
Both the state Assembly and the Senate held sessions last week but did not decide on the online sports betting issue. There are three potential outcomes that residents could expect.

First, state lawmakers could decide to vote on the issue this year under the guidelines of a constitutional amendment. If passed, the decision would need to be reaffirmed in 2021 and then voted on by the state’s residents in November of 2021. However, the deadline for such a move was early August and no plans have been made to reconvene the Legislature for this year. So, the earliest that residents would likely see a ballot question would be November of 2023.

Second, lawmakers could pass a revenue enhancement bill in the coming months which includes legalization of online sports betting. A similar move was seen last year when Senate Democrats issued a nonbinding political message approving mobile sports betting. State Senator Joseph Addabbo, a Democrat from Queens, took this as a good sign and favored the decision not to take the route of constitutional amendment. Both Sen. Addabbo and Assemblyman Pretlow see the amendment process as unnecessary and costly as opposed to a bill’s legal efficiency. They are comfortable accepting the constitutional amendment process as a strong second option should Governor Cuomo decide to veto a bill from the Legislature.

Third, lawmakers could simply pass on the issue altogether. Many in the state’s Assembly see other revenue building plans as more comfortable and less of a moral quandary.

In the coming weeks and months, as the revenue gap widens, lawmakers in New York will see more pressure to act and get the deficit under control.