Last month, the Massachusetts House delayed making a decision on legalizing sports betting. As part of a proposed economic development plan, proponents of sports betting see it as a way to generate much needed revenue for the state. In addition, as a state that is home to some of the most popular sports franchises in the country, sports betting in Massachusetts is poised to generate huge profits for investors. Industry experts as well as the Massachusetts Gaming Commission estimate potential profits to be in the $40 million range with a ceiling as high as $61 million.

From a Legal Standpoint

The House met in July to discuss and decide upon a statewide economic and employment support plan. This is in response to the Covid-19 shutdowns that have emptied both private and public coffers. The bill, House Bill 4887, was passed in a 156-3 vote in the State House of Representatives. However, the issue of sports betting caused dispute in the State Senate. The bill was eventually passed unanimously but with the sports betting sections 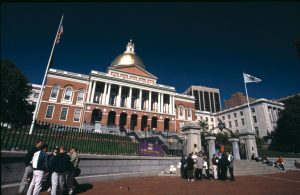 State Senator Michael Rodrigues said that the “time is not now, nor is this the proper vehicle to do so in.” He was not alone. Many in the State Legislature expressed concerns of deciding the issue of legalized sports betting within a bill aimed at providing relief amidst the Covid-19 pandemic.

The Future of Sports Betting in Massachusetts

To many in the State Legislature, sports betting in Massachusetts has a bright future. The House Bill was aimed at allowing sports betting within casinos and racetracks around the state in the near future. In the long term, the bill provided for an online facet in order to infuse competition and options for consumers in the budding market. Notably, Massachusetts decided to drop the requirement of partnering online sportsbooks with physical casino locations. This would have allowed the state to provide one of the most competitive online offerings in the country, had the bill passed.

Massachusetts Governor Charlie Baker said, “We wanted to give Massachusetts the ability to have people play here rather than playing elsewhere.” He went on, “I absolutely believe that, in addition to sort of the cross-border competition issues that would be addressed by doing something here in Massachusetts, it would certainly generate revenue and it would be something that a lot of people would be interested in here at home as opposed to doing across the border; we would like to see that happen.”

The House Bill also had provisions which called for a 1% Venue Fee. One percent of the gross revenue earned from a betting event in the state of Massachusetts would go to the owner of the event’s location. A controversial provision and the first of its kind, many believe any such proceeds should benefit the towns and communities where the events take place.

The Massachusetts legislative deadline has been extended until the end of 2020. This gives lawmakers time to construct a dedicated sports betting bill aimed at legalizing the practice in line with the state’s financial goals. In the meantime, Massachusetts residents will be forced to travel to nearby states like Rhode Island and New Hampshire to place legal sports bets.