BetMGM announced last Thursday that it will officially be launching its mobile sports betting app at Nationals Park, as part of its partnership with Major League Baseball’s Washington Nationals. The announcement makes BetMGM the official exclusive sportsbook of Nationals Park and is part of a larger deal that will also bring a retail sportsbook to the ballpark later this year. The launch of the mobile sportsbook marks a significant milestone for the Nationals, but also the MLB, who has had a complicated past with sports betting.

Details About the App and Sportsbook

BetMGM’s mobile sportsbook is officially available for download for both iOS and Android devices in Washington, D.C. However, the app is unique in that it can only be accessed within range of Nationals Park. Due to local gambling laws, those interested in placing wagers on the BetMGM app must do so within a two-block radius of the ballpark. That being said, the BetMGM app and sportsbook will integrate with MGM Resorts’ M life Rewards program, giving fans the opportunity to redeem gameplay for rewards at MGM Resorts properties throughout the country. Both the Washington Nationals and BetMGM hope to use the app to revolutionize the fan experience, giving them access to sports betting lines that make them feel like they are part of the action. 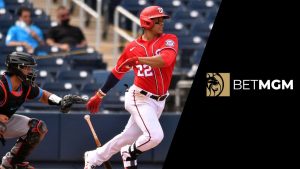 Adam Greenblatt, CEO of BetMGM, has shared that the new partnership is part of the company’s plan to continue expanding within the region, building on the success they have found at their new Virginia locations. Both BetMGM and the Washington Nationals feel that the launching of the new sportsbook is a monumental moment for innovating the fan-experience. Alan Gottlieb, Chief Operating Officer of Lerner Sports Group, praised BetMGM for giving fans a mobile app that will allow them to directly interact with what’s happening out on the diamond, and went on to express that the retail sportsbook will provide fans in the community with “a first-class gathering place to celebrate their passion for sports.”

Later this year, a team merchandise store will be converted into the retail sportsbook location that will be open seven days a week, year-round. The sportsbook will be connected to the stadium with a street entrance, but fans at the game will not be able to enter the sportsbook from inside the stadium. Per MLB rules, the retail location may not be accessible from within the stadium. The rule is a lingering reminder of the league’s previous stance against sports betting, but that stance may change even more in the coming years.

BetMGM’s sportsbook at Nationals Park is the second sportsbook to open at a professional sports venue in the District this year. In late May, the Capital One Arena, home of the Washington Capitals and Washington Wizards, opened their William Hill sportsbook. At the time, it was the first of its kind in Washington D.C., but now the Washington Nationals are getting in on the action. Illinois has also approved legislation that will allow for sportsbooks to become operational within professional sports venues, and Wrigley Field in Chicago has partnered with industry leader DraftKings to launch a sportsbook of their own. The increased interest in the cross-over between sports and gambling is relatively unchartered territory and marks a significant shift that indicates the wider social acceptance of sports betting in the United States since the Supreme Court’s 2018 decision to allow states to create legislation allowing sports betting.

Professional sports in the United States have traditionally shunned the idea of this cross-over, fearing that the mingling to sports and sports betting could lead to infamous issues like the controversy that surrounded Pete Rose, after he was involved in a betting scandal that impacted his career in the MLB. Now the league is trying to balance the lure of sports betting revenue, while maintaining the integrity of the game and avoiding turning away fans and families who may have no interest in gambling.

Representatives for the Nationals and the MLB are now toeing that line with the introduction of sports betting into Nationals Park. Their ability to maintain the balance could have larger implications for the future of sports betting and professional sports venues throughout the country.